Qld set for truth inquiry in treaty plan - Indigenous stories of colonisation will be heard and documented to "free people up from the shame of the past" as part of Queensland's path ...
Investigations launched into Rokeby fire - Tasmania Police are appealing to the public for information, after fire tore through a home on the Eastern Shore. Tas Fire crews were called to a p ...
Australian virus cases near 10 million - Australia could register its 10 millionth case of COVID-19 by the end of August.
NRL still in talks on grand final venue - The NRL will wait until later in the week to make a call on which stadium will host the grand final as talks continue with the Queensland government a ...
Morrison betrayed Australia: ex-minister - Scott Morrison should quit parliament after he "betrayed" the Australian people following revelations he secretly swore himself into several ...
518 new Coronavirus cases today - A slight jump in Coronavirus numbers overnight, as we continue to ride the Winter wave. 518 new infections have been reported in the last 24 hours, ...
Don't suspend beef imports, PM tells China - Prime Minister Anthony Albanese says China should not use foot and mouth disease as an excuse to stop importing Australian beef.
Morrison's secret roles under legal review - Anthony Albanese will receive advice next week on the legal impacts of Scott Morrison's decision to hold five other ministerial portfolios in governme ...
Bike pests collared - Glenorchy Police are cracking down on the unlawful use of motorised pushbikes, following an increase in reports of dangerous riding behaviour on pub ...
Invasive crazy ants found in Queensland - An invasive colony of yellow crazy ants has been discovered in Queensland's world heritage-listed far north, spanning an area of 77 hectares.

LGH nurses to down tools 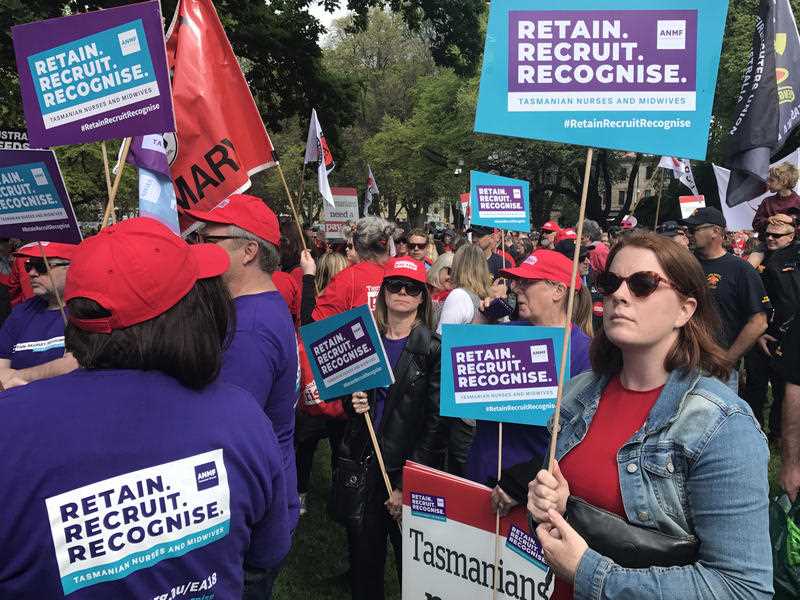 Nurses and midwives in Tasmania will walk off the job en masse for the second time in two weeks as part of their continued push for improved pay and conditions.

The Australian Nursing and Midwifery Federation is holding strike action outside the Launceston General Hospital for 15 minutes on Wednesday afternoon.

"It sent a very strong message to the government that enough is enough," ANMF state secretary Emily Shepherd said in a statement.

The union has rejected the state government's offer to bring forward enterprise agreement negotiations if strike action is called off.

Premier and Health Minister Jeremy Rockliff, who on Friday opted not to head to New Zealand on a trade mission so he could focus on health system challenges, has urged the union to talk in good faith.

The union is seeking immediate resources, such as clinical coaches to provide support to nurses and midwives through their novice-to-expert transition.

"We're hoping the government will come to the table with concrete solutions we can put back to members and, potentially, call off our strike action," Ms Shepherd said.

The union also held strike action outside the Hobart Repatriation Hospital last week and is planning further strike action in the northwest in coming weeks.