Loads of guns surrendered - Dozens of guns are out of the community in Northern Tasmania. Crimes involving guns have been prevalent in the Launceston area in recent times, so ...
Morrison silent on open border benchmark - Scott Morrison has refused to reveal the benchmark for reopening the international border, saying only that the restrictions will remain in place unti ...
Devonport man wins big - A Devonport man says he's going to build himself a motorbike track after pocketing $2.5 million in Saturday's TattsLotto draw. His winning ticket w ...
Drink driver collared after crash - A woman's in serious hot water after an alleged drunken crash in the state's south. Police have charged and bailed a Sorell woman with exceed 0.05, ...
PM working with Qantas on India testing - Scott Morrison has hit back at calls for Australians to be brought home from overseas whether they have tested positive for COVID-19 or not, saying it ...
Labor seeks new leader as White stands down - Opposition Leader Rebecca White will not re-contest the party's leadership following Labor's third consecutive election loss. Ms White announced he ...
Concern over federal home deposit schemes - The federal government insists the housing provisions in its latest budget will finally make the Australian dream more accessible, especially for sing ...
Stuart, Barrett hit out at NRL crackdown - Canberra coach Ricky Stuart fears the NRL's latest edict could tear apart the fabric of rugby league after four more sin-bins and a send-off scarred t ...
Half-full India flight lands in Darwin - The first flight of repatriated Australians from virus-ravaged India has been transferred to the Howard Springs quarantine facility after touching dow ...
Man charged after plane incident - A 27-year-old Queensland man has been charged in relation to a disturbance on an incoming flight to Hobart on Friday night. Following a complaint f ... 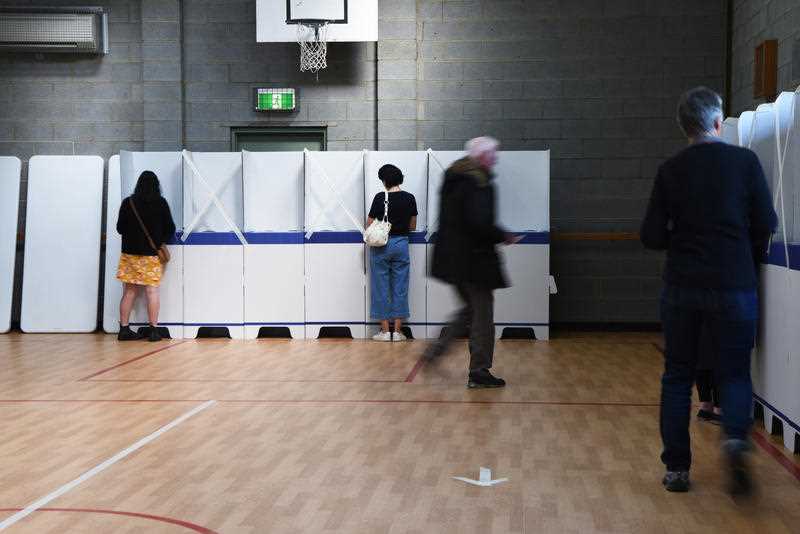 Voting has closed and counting is underway tonight for the state polls, as well as the results for the upper house seats of Windermere and Derwent also being tallied.

The Liberals have been accused of focusing their campaign on the popularity of Premier Peter Gutwein after he polled unprecedented preferred premier numbers for his handling of the pandemic, while other candidates have been largely silent during the election in a tightly-managed campaign.

With the Liberals needing just one extra seat for a 13-seat majority, their path to majority government is a lot easier.

On Labor's side, Rebecca White's opposition needs to gain another three seats to control of the house of assembly.

The electorate of Clark is considered one of the hardest to call due to high-profile independents Sue Hickey and Kristie Johnston contesting the seats - they're considered a chance to take votes from Labor after Scott Bacon quit Parliament in 2019.

The Liberals will need ex-labor and ex-independent candidate Madeleine Ogilvie to win for a clear path to majority if they can't gain another seat in Braddon or Bass.

She's hopeful of improving on their 2018 result which saw them reduced to two seats:

'We have got a fantastic candidate in Bass and a great team around him in Jack Davenport, and we know that we're a good chance for a seat.'

Dean Winter's belated entry into the Franklin contest for Labor could throw a spanner in the mix for the Liberals and at least one Labor candidate.

Jacqui Petrusma and Nic Street, Green Rosalie Woodruff and Labor's David O'Byrne and Alison Standen are the other incumbents.

In Bass Labor's Janie Finlay is rated a chance to knock off colleague Jennifer Houston for a seat if the Liberals pick up a fourth seat. Incumbents Peter Gutwein, Michael Ferguson and Sarah Courtney won't be troubled along with Labor's Michelle O'Byrne.

The contest for Braddon exploded yesterday with news popular Liberal candidate and former Mining Minister Adam Brooks may be investigated by Victorian authorities amidst reports of a fraudulent drivers licence.

Premier Peter Gutwein, who's desperate to pick up a fourth seat in Braddon, has backed Mr Brooks to the hilt over allegations of fake dating profiles.

'Mr Brooks who I spoke with yesterday has denied these allegations. Today the people of Braddon will have the opportunity to have their say on the future of Mr Brooks.'

The Lyons contest is considered the most predictable and there's ever chance it won't change at all, meaning Labor Leader Rebecca White, colleague Jen Butler, Liberals Guy Barnett, MArk Shelton and John Tucker would all be returned.