Colourful to the last: Tassie votes 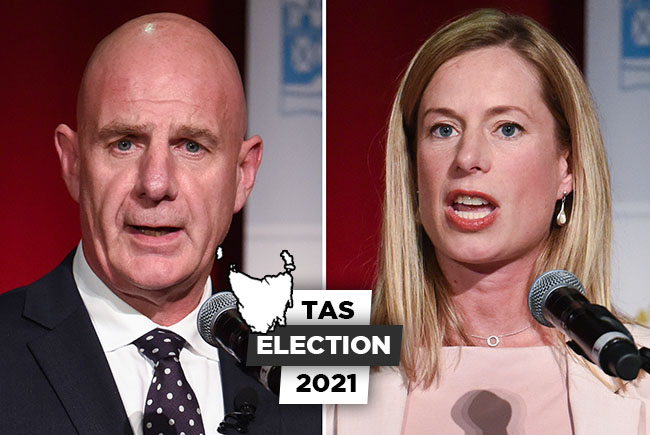 The former Mining Minister is the subject of scandalous reports surrounding fake dating profiles and a Victorian drivers licence.

"These matters will take their course, but the main point here is that, in speaking with Mr Brooks yesterday, he has once again denied these allegations," said Mr Gutwein.

The Premier has again urged Tasmanians to elect a majority Liberal government, but with popular pollies Will Hodgman and Labor's Scott Bacon now gone, Franklin and Clark are hard to predict.

Ex-Liberal Sue Hickey is a high-profile independent running for Clark along with Glenorchy Mayor Kristie Johnston.

"Majority government has been a real democratic threat here in Tasmania and people have seen that nothing has been achieved under it," Ms Hickey told Sky after voting in Hobart.

"I'm definitely willing to work with however the Parliament is configured; I believe the people have the right to choose who goes into Parliament."

"There is never going to be a Western Australia-type landslide, whichever way it goes," said Prof Herr.

"It will always be within a narrow band of roughly between seven seats being the lowest that could be won, 15 being the highest."

While Mr Gutwein is vowing to resign if he fails to achieve a 13-seat majority, Labor Leader Rebecca White is again refusing to rule out doing deals if Labor falls short.

"I'm focusing on winning, I'm not thinking about anything else," said Ms White.

Around 260 polling places are open around the state until 6 pm, with dozens of those also taking votes for today's Windermere and Derwent Legislative Council polls.

More than 60,000 pre-poll lower house votes have already been cast; roughly double the total seen in the 2018 polls.