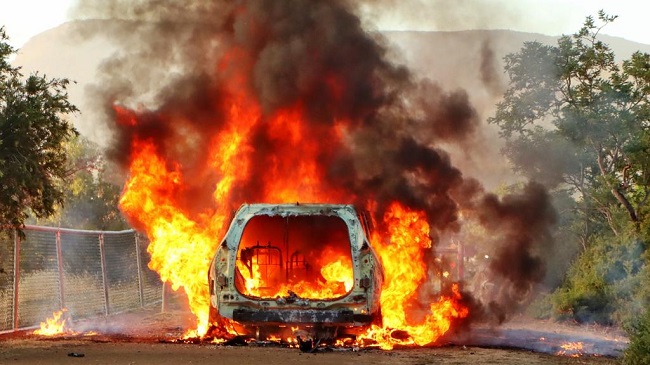 Tasmania police is investigating the circumstances surrounding several vehicles being deliberately set alight on Main Road at Claremont in the state's south on Tuesday night.

Detectives say information suggests that one vehicle had been targeted by an unknown person, however as a result of a container of fuel catching on fire, three nearby vehicles have also been damaged extensively by fire.

At 9:20pm, Tasmania Fire Service rushed to the scene and extinguished the fire - the value of the damage caused totals approximately $20,000.

Some witnesses at the scene reported seeing a male in the area at the time of the blaze.

He is described as:
• Wearing a black and white spray jacket, with a grey hooded jacket underneath, black track pants, approximately 175 cm, with blonde, mullet styled hair and aged in his late 20’s or early 30’s. The males was reportedly observed carrying a red fuel container.

• Also observed in the area at the time was a late model ute, which was blue in colour that police believe may have also been involved.

Police would like to speak to anyone who has information in relation to the incident or observed suspicious activity in the area. Information can be provided to Tasmania Police on 131 444 or Crime Stoppers anonymously on 1800 333 000.